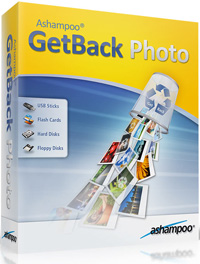 Photos are full of memories and often have a priceless, sentimental value. Especially then it is painful, when one realizes that the digital photos of the own wedding, pictures of the children’s births or of the last holiday are gone and that there is no backup.

These are some reasons for the loss of digital photos :

The memory card of your digital camera is faulty

A USB flash drive was formatted or is defective

The memory card of your smartphone was deleted

The file system is corrupted

With Ashampoo GetBack Photo the loss of digital photos doesn’t have to be permanent. The program enables the quick recovery of photos from different storage devices in just a few steps.

In contrast to many conventional undeleter programs, Ashampoo GetBack Photo recovers not only photos that were deleted “normally”, but also images from storage devices that have already been formatted.

Did you know that the chances of a successful recovery are becoming increasingly smaller the more data is written on or deleted from your external hard disk drive and USB flash drive!? Download Ashampoo GetBack Photo now, be prepared for any emergency and recover your photos before it’s too late!

Scan of all storage devices in the system

Photos might even be found, after the storage device was formatted

Display of recoverable photos as thumbnails