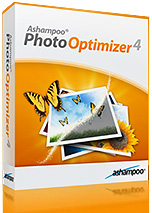 Turn your pictures into eye-catchers! Wow… it’s almost magical how Ashampoo Photo Optimizer 4 optimizes and polishes your photos to high gloss with just one click. No annoying adjustment of tonal values or gamma corrections. No manual determining of white balance values or unsatisfactory back and forth of color, contrast and brightness controls…no! One click and you won’t believe your eyes. The results are so brilliant, clear and so colorful that one might think that your photos were edited by a specialist with image processing software.

The Ashampoo Photo Optimizer 4 combines a modern and clear program interface, which is already prepared for the touch screen controls of the latest monitors and laptops, with intuitive usage and a thought-out range of functions.

Among the features of the program are also several effects that you can apply to your photos and that will shed new light on them. An absolute highlight among the effects is the age image effect with which you will set your photo back to the pioneering days of photography. First class results are also achieved with other effects or rather functions, for example red eye correction, inversion of colors or watermarking.

The Ashampoo Photo Optimizer 4 is the perfect tool for the wow effect in your photos – quite simple, entirely comfortable and easy to use even for inexperienced users.

The best features at a glance
Quick:

Conversion of photos into the desired format

Before / after view
Effective:

The Ashampoo Photo Optimizer 4 convinces with its clearly structured user interface including an integrated image viewer in Explorer style for a quick access to all your digital pictures. Furthermore, you can now also adjust the thumbnail view of the photos according to your wishes. You can for example switch between vertical and horizontal order as well as change the size of thumbnails.

Just select a picture, click on “Optimize” and experience the wow effect. Your pictures will become more attractive, brighter and more natural. No matter whether you want to optimize one or several pictures

with the Ashampoo Photo Optimizer 4 everything is finished with just one click.
Wide range of functions

The Ashampoo Photo Optimizer 4 has all functions that you need to make the best out of your photos – red eye correction, several effects, watermarking, color correction, one click optimization, rotate, mirror, age images and lots more. The result of an optimization or an effect can be comfortably viewed and compared to the original picture in a before / after split screen. If you don’t like an automatic optimization, you can do a manual color correction with the help of slide controls.

Correction of the dreaded red eye effect in flash photos is just as easy: Just roughly select the part of the photo containing the red eyes and click, Ashampoo Photo Optimizer 4 does the rest. With one of all the effects your pictures will become eye-catchers. Let the program for example age your image and experience the fascination of old photo in your latest pictures. If you don’t want others to boast themselves with your photos, just use a text or a symbol as watermark for your pictures. This makes a lot of sense especially with photos that you would like to post on the Internet. The photo optimizer will help there, too.

With the Ashampoo Photo Optimizer 4 you can quickly and easily present your dream photos to your family and friends. Send your optimized pictures for example by e-mail. For this the size of the photos can be decreased appropriately. Now you can also share your brilliant pictures with your friends on Facebook. For this you just have to login to Facebook and grant Ashampoo Photo Optimizer 4 access. Furthermore, you can also upload your pictures to Picasa, use them as desktop background or print them out.