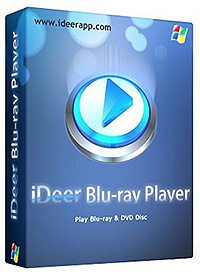 iDeer Blu-ray Player is a useful application for the users that want to play Blu-ray movies on their desktop.

The program allows you to watch the movies and to share your impressions with your friends by posting messages on Tweeter or Facebook. You can take snapshots of your favorite movie scene by using a keyboard shortcut. The player provides support the most popular video formats such as CD, MOV, AVI, MOV, FLV, WMV, MP4, MPEG, RMVB and more.