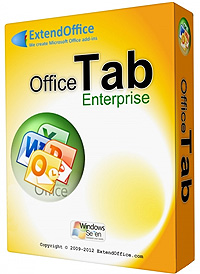 ExtendOffice.com company introduced a new version of its small but very useful utility called Office Tab The principle of Office Tab is relatively simple, but no less effective – the windows open documents are displayed in the interface of Office applications as tabs open pages in modern browsers.

Utility Office Tab eliminates one of the few shortcomings of the package Microsoft Office – the lack of an intuitive tool for working with large numbers of public documents.
Although the company Opera Software has implemented a mechanism of tabs in my browser for quite some time, Microsoft has implemented a similar approach only in the browser Internet Explorer, but not in other applications.

Partly a problem dealing with multiple open documents now decides to improved user interface of Windows 7, but the utility Office Tab fixes mentioned drawback in the root – each application of a series of Office (Word, Excel and PowerPoint) gets its own set of tabs for all open documents.