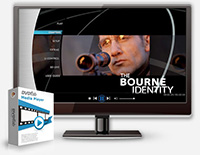 DVDFab Media Player can smartly tell the movie folder you are loading is a DVD folder or Blu-ray one. In addition, it also has the capability to collect the movie infos available from internet, like title name, release date, rating category, director, actor & actress information, poster etc. So, you may get something you are interested.
Your current Media Player does not play the movie released last week? Dont worry, DVDFab Media Player can do this. As soon as you insert the protected disc into optical drive, DVDFab Media Player will access it and then connect its server to break the protection code in less than a minute, be it AACS or the latest BD+. Keep in mind, to achieve this, you have to allow the software Player to access the internet.
As known, one of the reasons why Blu-ray survives the Media format war is that it delivers delicate 1080p video. Apart from this, the DTS HD Master Audio or Dolby True HD Audio coming along with Blu-ray discs also rocks. With this Media player, you lose nothing

DVDFab Media Player is a freeware, on the premise that you use it only for playing Blu-ray ISO files, folders and other video files from your local hard disc drive. A registration code is required after 60 days if you have the need to play a real disc, be it a Blu-ray or DVD.